I’m a notoriously boring person when it comes to mixing up my breakfast options. I have two or three staples that I eat on a regular basis and anything else is usually because it’s a special occasion or because I’m eating out. I have porridge for breakfast for about 70% of the year (because it’s just too hot in the middle of the Australian summer) and most days of the week. As boring as that is, it does come with a number of benefits in that I have my healthy little porridge dish that is full of goodness every morning.

Over the past couple of years I have developed a set recipe for my porridge that contains all sorts of healthy extras but also remains yummy. Don’t be put off by the number of ingredients, all of which are optional. It’s literally just a case of adding a spoon of this and that to the saucepan (or bowl if you’re microwaving).

The key with porridge is to not get too hung up on measurements. Its pretty difficult to get wrong given that the only required ingredients are oats and milk/water. The ratios are not important and depend entirely on how thick or runny you want your porridge to be! I never measure out the ingredients really, I just spoon out the chia seeds, give a little shake of the ground cinnamon bottle etc. 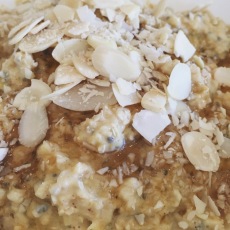 1. Place the oats, cinnamon and LSA in a small saucepan.

2. Cover with milk and cook on a medium heat until the milk has been absorbed.

3. Mix in the chia seeds and bee pollen.

4. Serve in a bowl with the honey and silvered almonds on top.

n.b. There is no “order” in which you have to add any of the extra ingredients. I choose to put the chia seeds and bee pollen in after cooking the porridge because I like the chia seeds to be raw and not soak up too much liquid and the bee pollen is similar to honey in that it melts into the mixture, but it would be fine if you put it all in at the beginning too.