Tea is one of my favourite drinks! I have several cups a day of all different varieties. I think it’s pretty common knowledge that tea is good for you (and much better than drinking coffee) but do you know why? Well I didn’t, so I did a little bit of research to find out what is good about tea and which, if any, is the best?

Overall the results seem to be that tea is a great drink with no real downside (except maybe caffeine intake). Drinking tea has a number of general benefits from simply hydrating the body to reducing puffiness and inflammation (which makes it good for your skin due to the polyphenyls contained to varying extents in all teas). Tea is also an anti-allergen which may reduce the impact of pollen or histamine allergies.

True tea is derived from a particular plant (Camellia sinensis) so any herbal tea that is made up of dried herbs or any other plant doesn’t technically count – but let’s face it we can just call them all tea. Most teas are quite high in caffeine but also contain tannin and theanine which have a calming effect, so tea isn’t qualified as a stimulant in the way that coffee is, instead, it’s quite a relaxing drink. 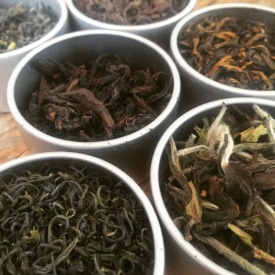 The difference between the tea used in tea bags and loose leaf is much greater than I imagined! The tea in teabags is actually the “dust” of broken leaves gathered up. While teabags may brew more quickly, the finely broken up leaves have lost a lot of their essential oils and aromas and will release more tannins than loose leaf tea, meaning that the flavour may be harsher or more bitter than loose leaf tea (this may be why people tend to add a lot more milk and sugar to their standard black tea which incidentally blocks some of the antioxidants).

Pyramid teabags are a slightly different creature, they usually contain loose leaf tea and therefore retain their benefits, the only downside can be if there is not enough room for the tea to expand properly when brewing.

Black tea is made by allowing the leaves to oxidise for longer than other types of tea. The oxidisation causes the formation of theaflavin and thearubigin compounds which have been linked to heath benefits such as lower levels of cholesterol. Significantly, black tea has been shown to reduce the risk of heart disease.

Green tea is produced by drying and steaming the leaves soon after harvest and has about double the antioxidant potential of black tea.

Green tea is an anti-inflammatory which may protect you from cardiovascular disease and may help lower cholesterol. It also has been shown to improve memory and attention span and in the long run may reduce the risk of dementia (lots of “may” I know, but scientific studies seem to be leaning towards rather than away from these claims).

Oolong  tea is similar to black tea but fermented for a shorter time giving it a richer taste. A Chinese study has suggested that oolong may prevent obesity and aid weight loss. This claim needs further research but results of an experiment on mice has been supportive. It seems that oolong aides metabolism and enhances the function of fat cells in the body which encourages regulation of weight.

To produce white tea, leaves are picked when they’re very young which gives it a much milder flavour. White tea is the least processed of the teas and consequently retains an even higher amount of antioxidants than green tea (so it contains the same benefits but in larger quantities)!

One interesting thing that I discovered is that white tea is generally considered to be the lowest in caffeine content of the teas. This claim is actually completely unsupported and no type of tea is necessarily higher or lower in caffeine, it depends on the specific leaves used, if they are blended with other ingredients and how it is brewed etc.

Rooibos is one of my favourite types of tea even though it doesn’t technically qualify as a tea (not coming from the Camellia sinensis shrub). It has quite a different flavour to traditional teas but is a pleasant and softer taste to regular back or green tea (it’s quite a different taste but difficult to define). Rooibos contains aspalathin and nothofagin which boost the immune system and prevent all sorts of diseases and other conditions.

Rooibos is very low in tannins and despite being from a different plant, contains a number of similar benefits as normal tea! The reason for this is that it also contains polyphenols which makes it an anti-inflammatory and an anti-allergen but also may reduce the risk of heart disease (as in other teas).

The biggest selling point for rooibos is that it is completely caffeine free naturally! Therefore, the negative side effects of consuming too much caffeine in drinking multiple cups of tea in a day are rendered completely redundant in rooibos!

Blends are teas with extra ingredients or flavours added (such as orange peel, rose petals, vanilla, cinnamon etc.). As such, they contain the same benefits and same levels of antioxidants as unflavoured tea. I particularly like blends as they give a little bit more variation in tea options and are delicious!

All in all, there is no tea that is bad for you. The biggest downside is the risk of consuming too much caffeine if you drink several cups a day. Overall, the best tea to drink is arguably rooibos (as it is caffeine-free and contains less tannins) but “real” teas may contain other benefits due to the differences in their biological makeup and processing.

As with everything, variety is the spice of life! The best approach to take to tea drinking is to vary the type of tea you drink depending on what you feel like at the time! Have a bit of everything! xx